Wish has been retired from breeding and has been spayed. 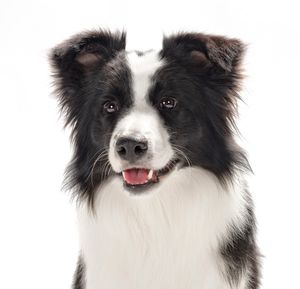 Wish is an outgoing, fun and sweet dog who loves to do 'all the things'. She has a natural desire for tug, retrieving, and swimming.  She is very biddable and willing to please.  Her foundation training came along along very easily. In agility, she's a lovely and efficient jumper, very bendy and finds her lines. She's a team player and very level headed.

Wish was confidently jumping off a competition dock into the water for her toy and earned her Novice Dock title at just 7.5 months of age and earned an invite to the 2017 NADD Eukanuba Champsionship at 8.5 months of age.....she's a total fish just like her Aunt Spryte. In 2018 she ended the NADD season the #1 ranked dog in the Junior Division.  She had an impressive show career early on, earning her breed CH in just four shows with major wins over Specials, two Owner-Handler group placements and an Award Of Merit (AOM) at the National Specialty, all before a year of age. She went on to finish her Grand Championship in just two weekends before she was two years old.

At 6.5 months old, Wish made her debut in the breed ring and goes Winners Bitch for her first point! Another day she goes Winners Bitch, Best of Winners, Best of Opposite, and Best of Breed Owner-Handler earning her first 3-point Major Win over Specials under respected Judge James Noe (pictured on left). Wish is a natural showman and loves to be in the ring with her mama --  I adore her about as much as she adores me!! 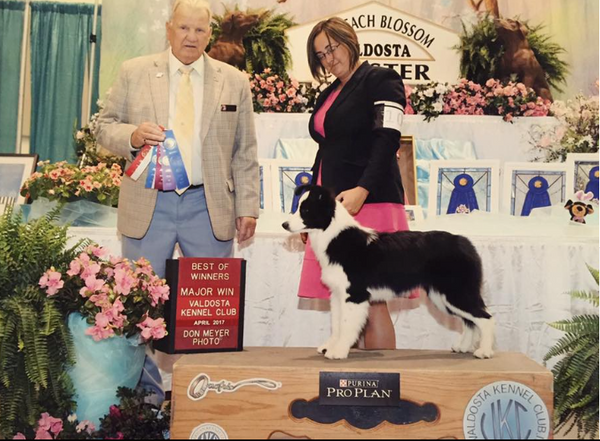 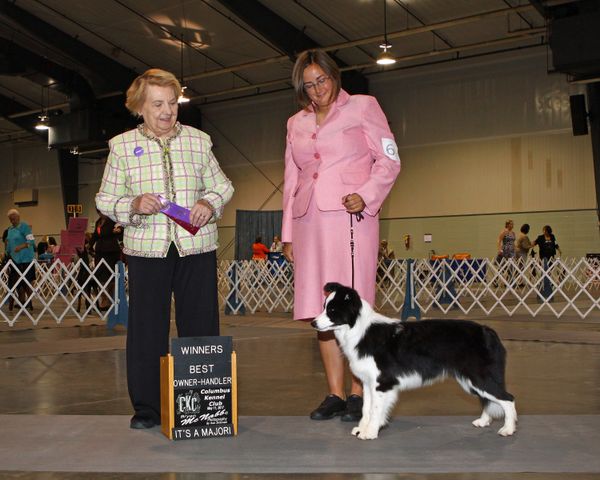 At 10.5 months and her third show, Wish goes Winners Bitch, Best of Winners, Best of Opposite Sex, and Owner Handler Best of Breed for a 4-point major win over Specials under judge Linda Robey (pictured below on left). At the same show, Wish got an Owner-Handler Group 2 under highly respected judge Pat Hastings (pictured below on right). Wow, wow, wow! Wish now has three major wins, two owner-handler Group 2 wins, and 11 points! She was now ranked # 12 in the Owner/Handler Series for the breed in 2017 with minimal showing. 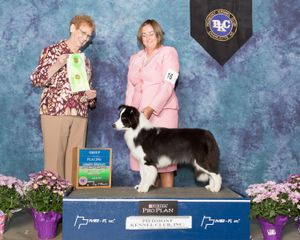 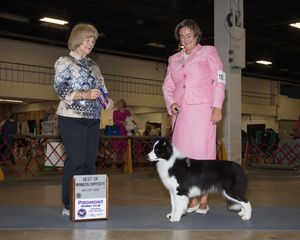 At her fourth show weekend and just 11 months of age, Wish goes Winners Bitch for another 4 point major win under judge Walter Sommefelt to finish her breed Championship. We are so proud of Wish and are thankful to the judges who recognized her quality and potential. 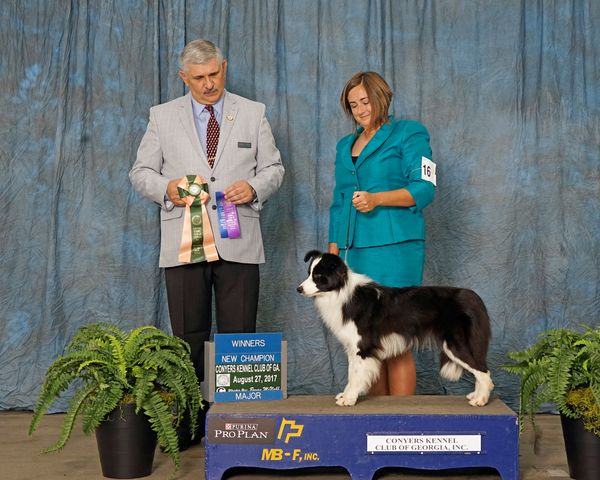 In September 2017 we went to the Border Collie National Specialty in Gray Summit, MO. This was Wish's fifth show (and first show as a Special/finished Champion), she was given an Award Of Merit over 64 seasoned Specials. She also won first place in her 9-12 Futurity Class.  We are so very proud of her and honored that she received this award at the young age of 11 months. 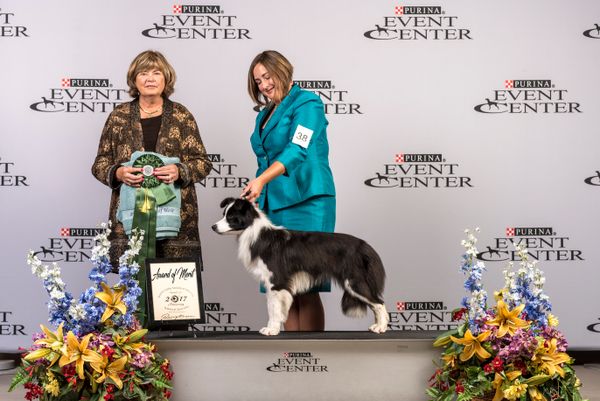 In 2018, Wish earned her Grand Championship in just two shows with competition wins all owner handled. She won with a Best of Breed and 5 point Major at 23 months of age!!!! 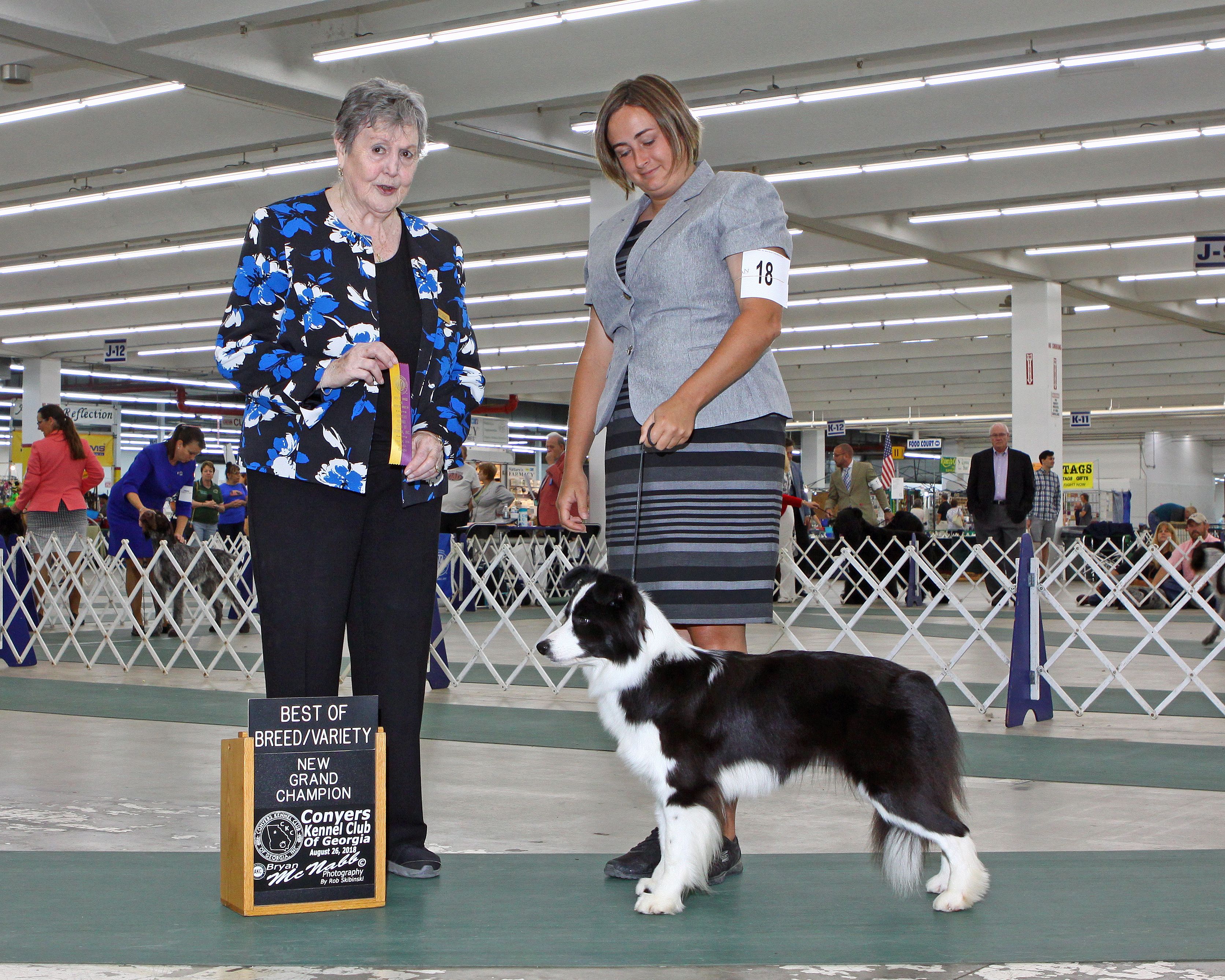 From the moment we set eyes on this girl we knew she was destined to be here with us. Our friend Dori was certainly right when she said there was something special about this girl and we are thankful she allowed her to come and stay with us. We are thrilled with our other girl from Dori, AKC CH HarborMist Armaretto Sunrise Crush RN BCAT ACT1 DSS CGCU CGCA "Spryte", and Wish is a half sibling (and a niece) to her. Spryte and Wish's sire is AKC CH major pointed "Turtle" which makes them both grandkids to GCH Bayshore's Hot Chocolate of Avatar PT HSAs "Hottie".  Wish's dam is AKC CH "Swift" which makes her a granddaughter to  "Fly" -- we have admired Fly and what she has produced (our Spryte is a Fly daughter). Wish is also a great granddaughter to GCH Borderfame Signature "Airly" as well as CH Borderfame Choc Chill ROM HIC CGC "Sprint".  We are so excited and thankful that Dori agreed to let Wish come to Georgia to join our pack!