The Force is neutered and was not bred. 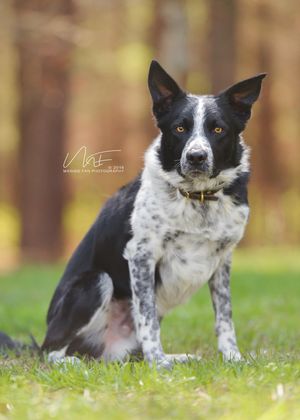 "The Force" is a striking black/white male with ticking from our only breeding of our versatile Siri (O'my! Know-It-All OA OAJ, 2016 Skyhoundz World Champion in Micrdog D/A) to Norma Stewart's talented Hooty (TN Hooty) -- click here to learn more about this litter. This makes him a half sibling to our Limit, who was the 2015 Skyhoundz DDAT World Champion in Freestyle!

Force is a solid dog with lots of power. He is turbo charged and chases down the disc with the greatest of ease. His mom, Siri, was the 2016 Skyhoundz World Champion in Microdog Distance/Accuracy and we are confident that Force will dominate the D/A field when he is older, too. In 2018, he qualified for the 2018 Skyhoundz World Finals for both the Classic and the DIscdogathon with some impressive scores at his first events. He has a big stride and natural tracking abilities.

He has started his agility training and has a powerful stride.  He is an intense dog and loves to work. In his agility debut, he went 3/3 in both Novice Standard and Novice Jumpers earning both titles in one show. We won't be perusing agility at the time as he enjoys the other sports more.

He loves to swim and now that we've officially started his dock diving training in 2018, he got a new personal best of 20'6" using half dock and 16" in Air Retrieve. He has natural pop and tracking abilities. He qualified for the 2018 North America Diving Dogs (NADD) National Championships which will be held in December of 2018.

When he isn't working, he has a wonderful off switch around the house. He is an easy dog to live with and gets along well with all types of dogs. He is very much like his mama in that he will greet people with a huge full body wag. He "woo-woo's" like his Aunt Limit, too. He is an honest and biddable dog. We are excited to see what Force accomplishes as he matures and continues competing in dock diving and disc.