**HotShot is now neutered. We have frozen semen stored for the future.

Litters (click on each link to meet the puppies!):

Once again we were not planning on a new addition, but when this very special litter was born out of Wendy Jordan's Wescot's Girl Crush "NV"  (Player/Puzzle 1.0) and Joan Lawson's AKC CH Holther's Perfectly Sketched MAD "Sharpie", we couldn't say no. HotShot caught our eye from the get go and we are so excited and very thankful our good friend Wendy agreed to let Hot make his way to Georgia to live with some of his relatives.

HotShot is sweet, outgoing, funny, and quite the character....he's quite the Big Shot! He reminds us SO much of his granddad, Player, and several of his other relatives who live with us. He has a larger than life personality and loves EVERYONE he meets. He is super stable and outgoing, but much like Player, LOVES to be with his person the most. He has good natural drive to tug and chase as well as knowing when to turn it off and relax. He is well started in rally, agility, and frisbee and is really showing a lot of promise. He has MAJOR hops for the disc and has great tracking/popping ability on the dock. In agility, he is focused and driven. He finds lines well and is a dream to train with his level headedness and eager disposition.

At four months old, HotShot earned his Canine Good Citizen and Novice/Intermediate Trick titles! He loves to work and learns new behaviors in just a few repetitions. At six and a half months old, he earned his Rally Novice (RN) title with multiple 100s and earning an invite to the 2019 Rally National Championships! In 2020, he won his class with perfect 100's again earning his Rally Intermediate title and earning him an invite to the 2020 Rally National Championships!

At the end of 2020, Hot made his conformation debut. He took RWD to the Major followed by WD/BOW for a 5 point MAJOR WIN the next day. In a large entry of 19 dogs/bitches, and Hotshot being the only colored dog in a sea of black and white competition, we are thrilled with this honor! Thank you to judge Mrs. Cindy Meyer for recognizing his quality (Mrs. Meyer also awarded Pixel (Dare/Spryte) a major win over the summer in TN). 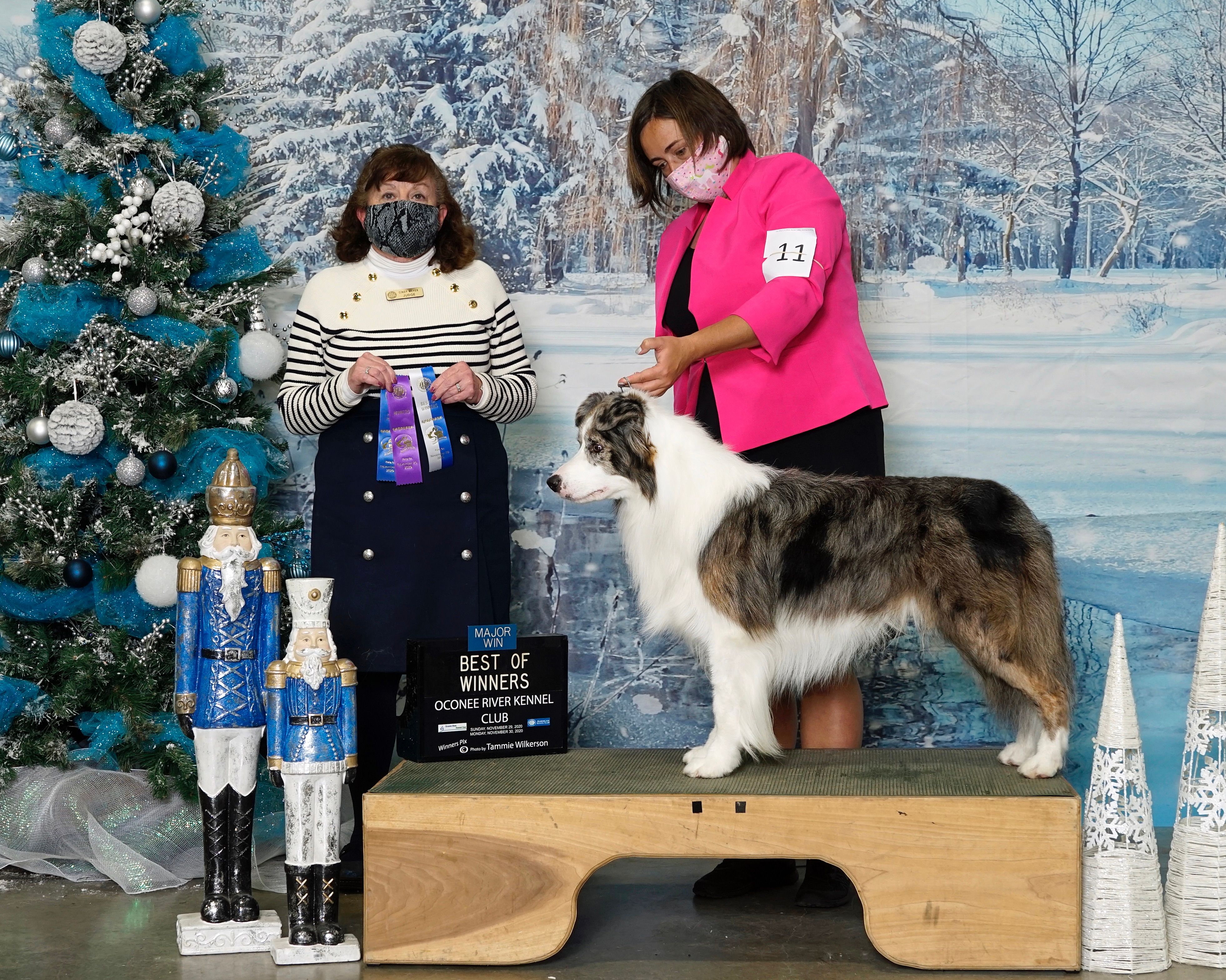 This litter was bred by my good friend Wendy Jordan/Wescot Border Collies and are Player's first grandkids! NV is a full sister to our talented little Glamour (making her half siblings to several other pups like Creature and River through Player) and Sharpie is a half brother to Hops (sire we have used in our program). Sharpie is also a cousin to our princess, Remedy, and an uncle to our co-owned Dream, Envy, Valor (Wish/Hops), and Cupcake (Spryte/Hops).

HotShot produced two lovely litters for us with our Story and Wish and he is now neutered and will be working towards more performance goals. The puppies from these litters are all showing great promise in their chosen sports -- agility, dock diving, disc, conformation, Search & Rescue, Obedience, and herding. We really are pleased with them all and their versatility so far.

We have retained two kids in our program to hopefully move forward in a few years; Sequel and Extra! (xWish) and Kelli has retained Scandal (xStory). You can click their names to be taken to their pages. We have frozen semen stored on Hotshot and look forward to watching these puppies grow and mature and hopefully having more Hotshot puppies in the far future using his stored frozen swimmers!

As of spring 2022, HotShot is temporarily living locally with Savanna who co-owns his red son, Sequel. Since Sequel is quite the prodigy in SAR, completing his National Certification at just 9 months old, we wanted to see how Hot took to it. HotShot has started his training for Cadaver under the expertise and guidance of Savanna and is excelling just as quickly as his son did. In the meantime, he is also continuing his training and performance career in agility, dock diving, disc, and has recently learned fly ball. He hit the lanes in June 2022 and earned his FD and FDX in one weekend, running clean with zero mistakes! As of Winter 2022, HotShot will be staying with Savanna and her family to continue his PACH and RACH journey, in addition to being a service dog for their son, Oliver.